Social Media Recruitment-why you may NOT get the Job

Here is why : Digital Reputations and Networks and their use in what is known as ” Social Media Recruitment ”

Interviewing has ALWAYS been a Two Way Street !

While before, this ” Street “had manageable traffic, now it is exploding exponentially. The Social Media Networking we are doing as a matter of routine ( including while we are supposedly ” on the job ” ! ) , egged on by all the major Sites and the Media is responsible for the “Digital Dirt ” we are spreading all over the Digital Highways. And this is the dirt being relied upon heavily by everyone for ” Social Media Recruitment “ !

While this has a positive side – which is then drummed up all over the Media and Internet by people more interested in ad revenues, memberships and page views, here are some views rarely even talked about. No one wants to talk about or be the harbinger of ill news. But think about them, impartially and you may see the truth !

These are the two sides of the Candidate / Client Interaction Street :

a) What the Company “knows” about you : NOT from the CV you have presented to the Company and their impressions during the interview but your Digital Signs all over the Net which are adding / subtracting from your ” Digital Reputation “. These include :

Your Network and the recommendations you have so vigorously targeted- and happily given too, when asked – are part of your ” Reputation “.

Then, what happens if a person in your Network, giving you a high recommendation ( and you happily in turn giving him so 🙂 ) is NOT one who the Interviewer Company is very happy with, for whatsoever reason. Doesn’t happen ? Well , we KNOW better !

BTW, this brings to my mind the ” Jacks ” we always heard about in our younger days. Did we ever consider them – or the persons using them ” good ” ? Do we still consider  nepotism in business ” good ” ?  Except that those were limited and could / would really pull their influence if they so wanted.

The Digital ” Jacks ” now in our Virtual Networks are, however, just that generally – virtual. And MUCH larger in number, due to our own efforts and cultivations, egged on by everyone else. However, unless they ” know” someone really well, they WILL be caught out when the time to check those ” Digital Recommendations ” comes. As it inevitably will, for anyone using Social Media Recruitment. And where would that, then , leave YOU ? A strongly suspect candidate, that is all !

Also consider that NOTHING on the Internet is ” confidential ” and NOTHING can ever be fully erased, whatever any website may claim. The photos you ( I ?? ) took drinking to glory with your friends, or dancing with your (ex) Boyfriend are already floating around on places even the Website has no control over. And , can be further MORPHED to anyone’s liking.

And all this is being made indexable and searchable by Googleshwar 🙂

b) What You /  Others “know” about the Company

Indeed the SAME networks and Digital Reputation extends to the Company also. And companies are spending tremendous amounts on Social Media Marketing etc. Not realizing that , again, they have NO control over the message that goes out – or the recommendations that could come in when it matters .

Imagine this Scenario : You have interviewed at a Company. Happily, you find a Linkedin connection and ask him about the Company, boss etc. What possibility you have that you will get a Correct, Unbiased perspective ?

If you think a bit, not necessarily a very high one ! Your situation , qualifications , experience etc. may be dramatically different from that of the ” Network Connection ” you are asking. And he may be putting in his OWN biases, without ever letting you know. In fact, NO one likes to ” responsible ” for someone else’s Career and so, unless the Company is a clear gainer over your present one ( which you will know about anyway ), you may not get a very strong recommendation about the Company / Boss you are thinking of working for.

Which will, in turn, no doubt have a bearing upon your interest, attitude and performance in further processes concerning this opportunity.

And while you are working on cultivating  such references someone else – maybe even a little bit less suitable for the job- may be in a much stronger position than you . Either because of a strong virtual reference, or , more possible, a stronger reference from the real world !

And the fact is, more ” Digital Reputation ” everyone creates, more uncontrollable the whole process becomes – for ALL concerned !

So what do we have  here – a classic case of a ” traffic logjam ” ! Nothing is moving. While there are people and jobs, no one is willing to stick their neck out. Everyone is waiting for the chimera of the ideal Company or the ideal Candidate. Till the need becomes too pressing to hold out any longer. When whatever call is taken will be a STILL more uncontrollable one !

Add to this the ” Vision ” clearly being pursued by the Giants to whom every human is just a piece of Digital Data and page views. Which could be lowering “growth” options across the board by ever increasing competition !

Comments, Brickbats ? This is just my view and I could be wrong . Correct me !

Thanks for the Biiiiig Read 🙂 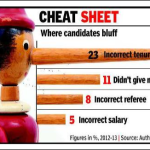 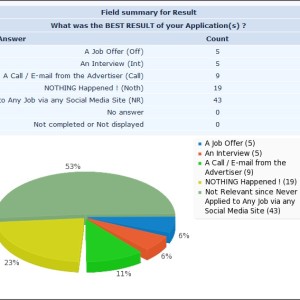 Is “Social Media” Getting You Jobs ? – Partial Survey Results

The successful person has the habit of doing the things failures don’t like to do…More Career Tips at https://mytopjob.in/r/cq !